First experimental set-ups and early machine concept developments in polymer Additive Manufacturing go back to the 60s and 70s of the 20th century. The Additive Manufacturing market landscape has changed over the last decades. It all started with the invention of the Stereolithography process by Charles Hull. This Invention can be declared as the point of origin for the polymer AM market as well as the entire AM market. It paved the way for early adopters of the technology and the development of further technologies principles.

Development of polymer AM systems

Invention of Vat Polymerization and Material Extrusion in the 1980s

During the 80´s R&D activities were pursued by several universities and organizations. Within these years three groundbreaking technologies have been invented and laid the foundation of today’s technology diversity. While Charles Hull invented the Vat Polymerization also known as Stereolithography (SLA), Scott Crump focused on the development of the Fused Deposition Modeling and Carl Deckard patented the Selective Laser Sintering (SLS) process. These inventions also led to the founding of 3D SYSTEMS, STRATASYS and DTM (now 3D SYSTEMS). These companies pioneered the AM market and paved the way for followers such as Electrical Optical System (EOS) who was founded in 1989. The first years, however, were characterized by R&D activities and not by a highly profitable machine sales business. Only few systems were sold to early adopters of the technologies.

In the early 1990´s further technologies were invented. HELISYS developed the Sheet Lamination technology and Binder Jetting was patented. Nevertheless, the technologies were not ready for series production. Polymer AM systems were predominantly used in rapid prototyping applications by printing visual models and haptic prototypes. In 1998 the Material Jetting process was developed by OBJET and the Digital Light Process (DLP) was invented and patented by Al Siblani, the founder of ENVISIONTEC. Over the years system manufacturers intensified the R&D activities and tried to implement the technologies at OEM´s, however, the systems were not yet ready for the needs of the potential users. The many patents have caused a stagnation of developments in the upcoming years.

Around 2010 the expiration of major patents caused the first Additive Manufacturing hype. Especially the expired patent for Filament Material Extrusion, better known as FDM, caused a wave of new startups that specialized in low-cost desktop printers that made 3D printing widely accessible even for private use. MAKERBOT, ULTIMAKER and PRUSA are only some companies, that focused on this market segment. Media and politics were praising the technologies as the next revolution in manufacturing. Reality during the 2000´s, however, was still a little bit different. Many systems lacked reliability and high productivity, so that series production was not in the focus.
Since then, many suppliers have developed systems that meet industrial requirements regarding reliability and productivity. Besides the established machine OEMs like 3DSYSTEMS, STRATASYS and EOS new players emerged and were able to collect large funding for a fast machine development and growth. One example is CARBON which was founded in 2013 and collected over EUR 550 million in until 2019. Even if Additive Manufacturing was not able to revolutionize the market in the beginnings of the 2010´s the hype caused the intensification of activities and increasing adoption of the industry. In 2016 HEWLETT & PACKARD stepped into the Additive Manufacturing market. With the introduction of its MJF technology it increased the pressure on the well-established SLS systems supplier to further innovate, to not lose to much of their market share.
With regards to the polymer market more and more series production applications are realized by Additive Manufacturing. Especially the consumer market with its mass customization applications seems fit for AM. Just to name a few examples, today AM is already used to produce molds in high quantity for the production of aligner in the dental industry. It is also used to customize frames for glasses and hearing aids. Another great example of the customization of the process is the production of prosthetics which increase the comfort of wearing.
In 2020 and the beginning of 2021 major acquisitions took place in the polymer AM market. STRATASYS acquired ORIGIN and RPS to diversify their technology portfolio. And ENVISIONTEC was acquired by DESKTOP METAL to add Area-wise Vat Polymerization, a high volume polymer AM production technology to their machine offerings. Additionally, system suppliers like MASSIVIT and MARKFORGED have announced to go public, to further intensify the development of their technologies and increase market penetration.
2021 was characterized by major technological announcements and acquisitions that were made especially by the large AM players. After a quite intense year of 2020, STRATASYS has further broadened their spectrum of technologies with the acquisition of XAAR to step into the Thermal Powder Bed Fusion market and intensify the competition with HP and their MJF system. In terms of high productive systems CUBICURE has developed the Cerion system. This system is especially designed for high volume production. A similar approach was published by BCN3D in early 2022. Both technologies are processing high viscosity photopolymers and are combining a principles of sheet lamination with the Area-wise Vat Polymerization. 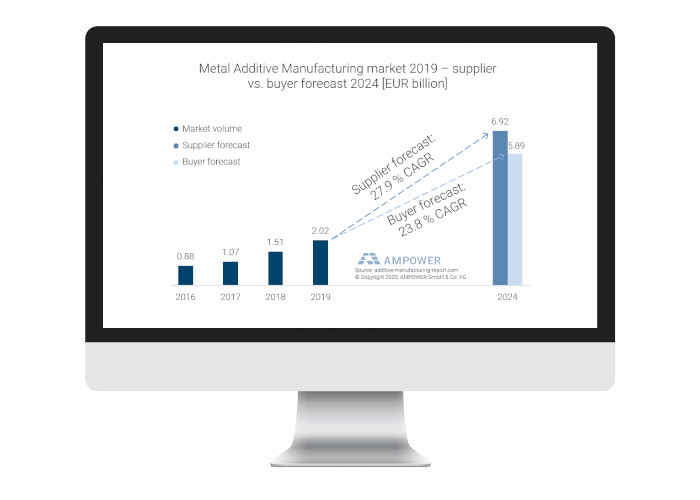